Want a career behind the scenes in film and TV drama but don’t know where to start? Want to know what jobs are available as part of a film crew and how to get them?

The free Hit the Ground Running Roadshow 2017 is here to help.

In November 2017 we will be traveling across Scotland with the HTGR Roadshow - your unique chance to meet top Scottish film and tv experts who’ve worked for BBC, STV and independent production companies.

It’s FREE to attend and you’ll hear their insider tips on:

- What jobs make up a film crew and what is available at entry level - What it’s like to work as part of a professional film crew - What employers ae looking from your CV and how to make yours stand out from the crowd - What to do next? Practical advice on choosing your next steps

Each fun and informal HTGR roadshow lasts 90 minutes and is followed by a chance for coffee and a one-on-one chat.

“A great opportunity to learn the different roles in film &TV. The CV advice is helpful to know what employers would want to see.”

“Laid back coffees at the end is useful for networking and getting any questions answered personally was a great touch.”

“Gave a lot of insight into the entry level positions that could be available to me and also helped me understand what things I will need to end up in the industry.”

“It was great that as well as getting an overview of what happens on set and how to get involved in that, we could also chat with the speakers afterwards and ask questions that were more specific to us.”

“Having the pros there to share their experiences was extremely useful.”

Places at the Hit the Ground Running Roadshow 2017 are FREE and strictly first-come, first-served. Reserve your place today!

All venues for the Hit the Ground Running Roadshow 2017 are fully wheelchair accessible. We offer BSL interpretation for all Roadshows on request. If you are attending a Roadshow and would like BSL interpretation please email info@hit-the-ground-running.co.uk.

We welcome all ages to the HTGR Roadshow. Under 16s need to be accompanied by an adult.

Photographs will be taken at the HTGR Roadshow for use by us on social media, websites and in the press. By entering the Roadshow, you consent to us photographing and using your image and likeness.

Free training for film and television new entrants across Scotland.

Hit the Ground Running at XpoNorth

Intro to Film and Television Drama 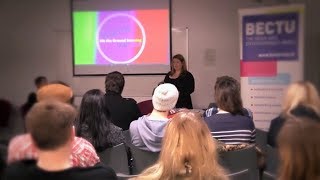 Free training for film and television new entrants across Scotland.

Hit the Ground Running at XpoNorth

Intro to Film and Television Drama